The cytotoxic payload or warhead is an important part of ADC. It is activated after being released from ADC in the cytoplasm of tumor cells and can destroy tumor cells even at low doses.

The antibody component in ADC cannot carry a large amount of cytotoxic payload due to its structure. Therefore, the cytotoxic payload in the new generation of ADCs must be extremely toxic to eliminate most tumor cells, even with minimal payload delivered.

ADC cytotoxic agents need to be studied under in vitro conditions to determine whether they are a substrates, inhibitors, or inducers of metabolic enzymes (such as cytochrome P-450 isoenzymes (CYP), and certain transport enzymes, etc.). These studies help to clarify the elimination/enhancing effects of in vivo factors on cytotoxic agents. 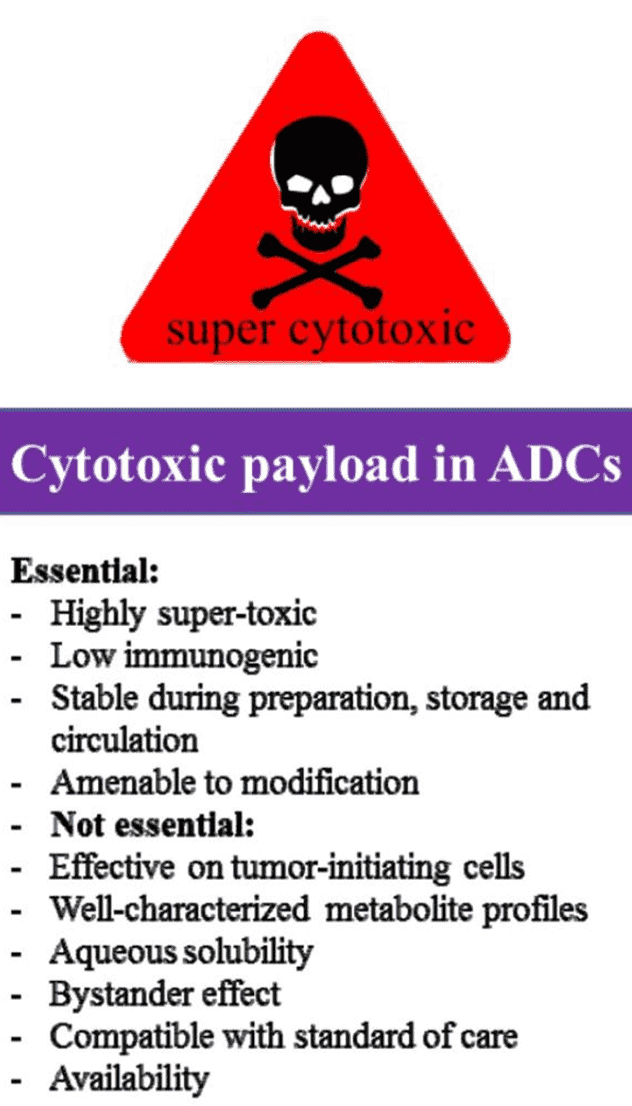 The cytotoxic payload should also remain stable during blood preparation or storage and circulation. Incompletely stable cytotoxic payloads may be transformed into undesirable drugs during binding or storage. The solubility of cytotoxic agents in aqueous solutions is another important criterion in ADC design.

The extremely strong hydrophobicity of the payload may change the biological properties of the antibody, thereby causing the antibody to undergo hydrophobic aggregation during the binding process or storage process. The hydrophilicity of the cytotoxic payload affects the permeability of the cell membrane of the parent ADC or its metabolites. However, the ability of cytotoxic payloads to form hydrophobic metabolites after lysis of ADC cells is desirable because metabolites with more hydrophobic groups have better blood clearance and safety. According to reports, about 95-99% of ADC molecules have been metabolized before binding to tumor cells. This may cause safety issues because it can enhance the potential cytotoxic side effects of ADC. Thus, the use of cytotoxic payloads with well-characterized metabolic profiles can be an advantage in enhancing the safety of specific ADCs.

The most commonly used cytotoxic drugs can be divided into the following two categories according to their mechanism of action.

Microtubule inhibitors can stabilize or destroy the stability of microtubules, thereby inhibiting the dynamics of microtubules required for proper mitotic function, effectively blocking cell cycle progression and leading to apoptosis.

DNA cleavers work by the introduction of DNA strand breaks.

Cross-linking is the connection of agents at two different positions on the same strand or opposite strands of DNA. The cross-linking prevents DNA replication, leading to possible cell death and anti-cancer action.

Akt is a protein kinase that plays a key role in various cellular processes such as apoptosis, cell proliferation, glucose metabolism, transcription, and cell migration. Inhibition of the AKT signaling pathway can lead to the induction of apoptosis.

DHFR plays a key role in regulating the amount of tetrahydrofolate in cells. Tetrahydrofolate and its derivatives are essential for the synthesis of purines and thymidines, which are important for cell proliferation and cell growth.