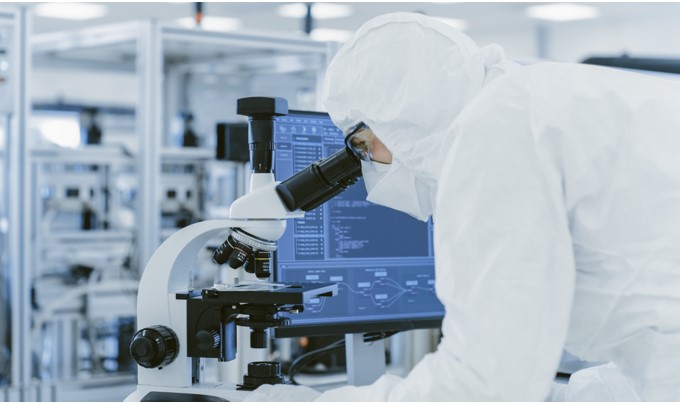 Antibody-drug conjugates (ADCs) are on the brink of widespread use for the targeted treatment of cancer. ADCs manage the toxicity of drugs with unacceptable narrow therapeutic windows by guiding highly toxic compounds to the target cells, thereby sparing healthy cells. Drug-to-antibody ratio (DAR) is an important quality attribute of ADC drugs, which represents the average number of antibody-conjugated small molecule cytotoxic drugs. Lower DAR will reduce the potency of ADC, but higher DAR will affect the ADC analysis pharmacokinetics and toxicity. In addition, the conjugation method is an important factor affecting DAR. Only by selecting a suitable conjugation technology can the ADC toxin be conjugated to the antibody uniformly and stably.

UV/Vis spectroscopy is a simple and convenient method to determine protein concentrations as well as the average number of drugs that are conjugated to the antibody in an ADC. This method requires that the UV/VIS spectra of the drug and antibody have different Amax values. The average DAR can be determined by using the measured ADC absorbance and the extinction coefficient of mAb at Amax and the extinction coefficient of drug at Amax. Currently, this technology has been widely used in the detection of various cytotoxic ADC drugs, such as maytansinoid DM1, methotrexate, CC-1065 analogues, adriamycin, doxorubicin, calicheamicin analogues and vc-MMAE. 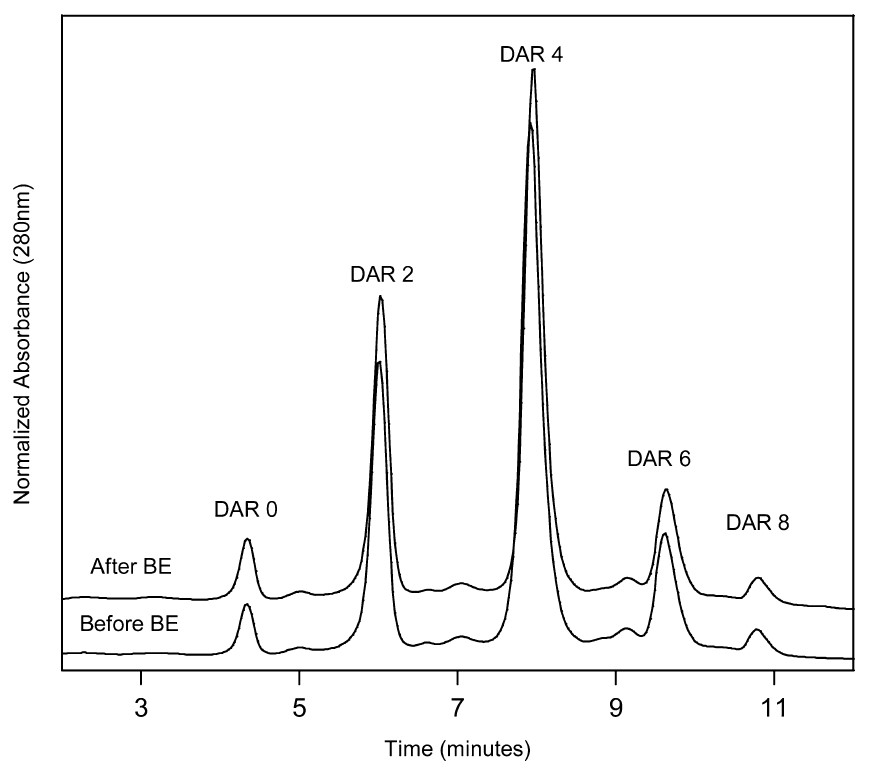 RPLC is mostly frequently used to estimate the average DAR. The main difference between HIC and RPLC is that proteins are denatured under RPLC conditions. Therefore, cysteine-conjugated ADCs cannot be eluted intact owing to the disruption of interchain disulfide bonds between the L and H chains of the mAb. RPLC is mostly used to separate the DAR species of reduced ADC related to H and L, but can also be applied on the native ADC to separate L, H, HH, HL and HHL fragments. In RPLC, interaction with the stationary phase is mediatedpredominantly through hydrophobic interactions between the nonpolar amino acid residues of proteins and the immobilizedn-alkyl ligands. Solutes are eluted in their order of increasingmolecular hydrophobicity. 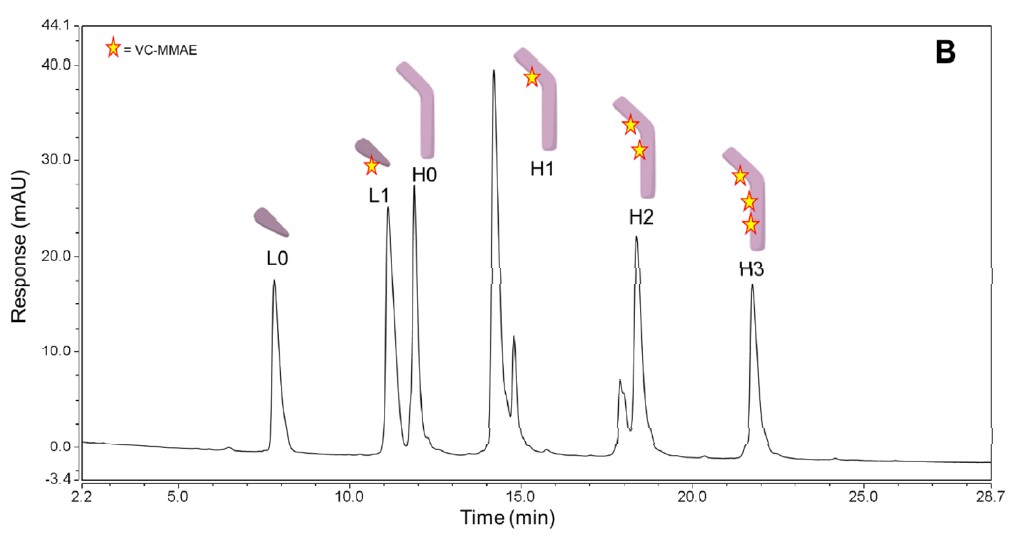 LC-MS has been widely used for ADC analysis. Preprocessing is required for ADC analysis using LC-MS, and several recent studies have focused on optimizing preprocessing in LC-MS. For example, deglycosylation by peptide-N-glycosidase F (PNGaseF) is generally used to eliminate the complexity of peak appearance. Using the reducing agent DL-dithiothreitol (DTT), heavy and light chains of the ADC were obtained, and alkylation is generally used after reduction to prevent the re-formation of disulfide-linked structures. Considering the method and integrity of proteins, protein characterization by LC-MS is further divided into four types, as shown in Fig. 4. Among these methods, middle-up and middle-down are more suitable for ADC analysis. 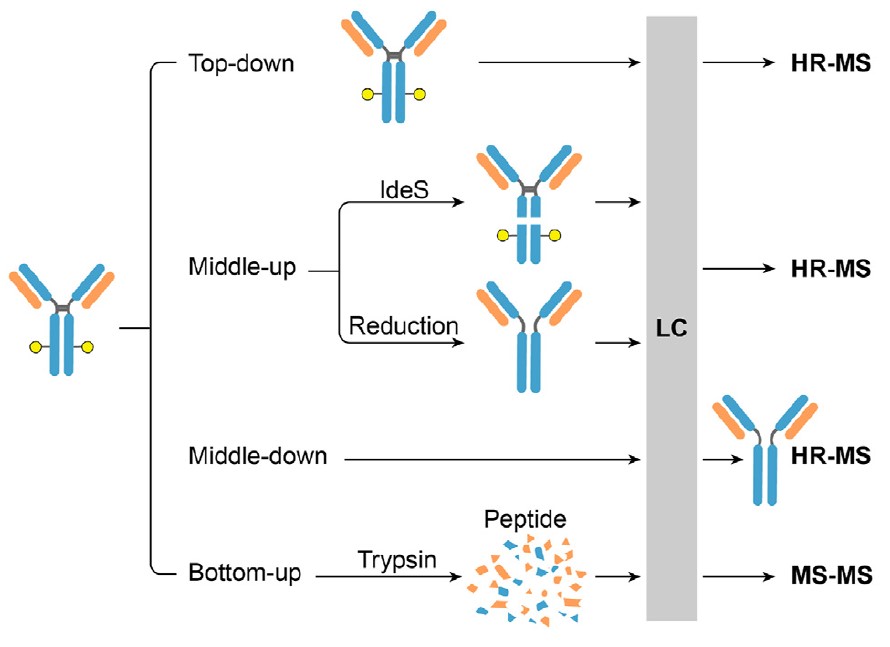 SDS is mainly used to separate ADCs with intact or H and L chain forms. Unlike size exclusion chromatography, SDS can also be used to separate sFc and Fd fragments. When CE-SDS is applied for lysine-conjugated ADCs, it separates loaded H or L chains because of the disulfide bridge interaction. However, the main peak is the intact antibody represented by H2L2, accounting for about 96%. In contrast, when cysteine-conjugated ADCs are analyzed, intact H2L2 comprises only 8.1%. Therefore, CE-SDS cannot be used to characterize the DAR of hinge cysteine-linked ADCs. In general, CE-SDS can be used to determine lot consistency of ADC conjugates. 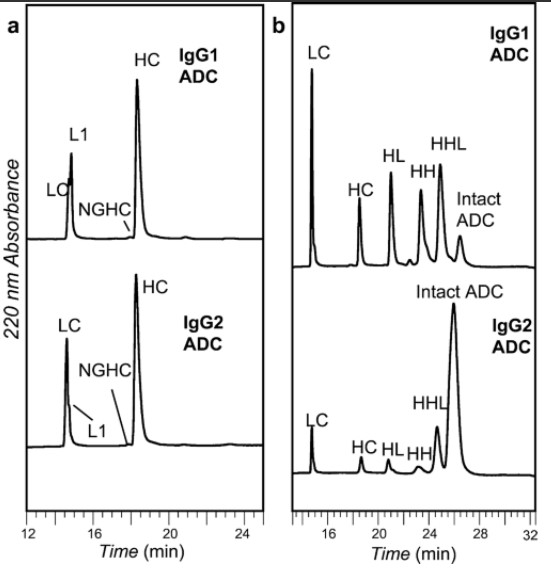 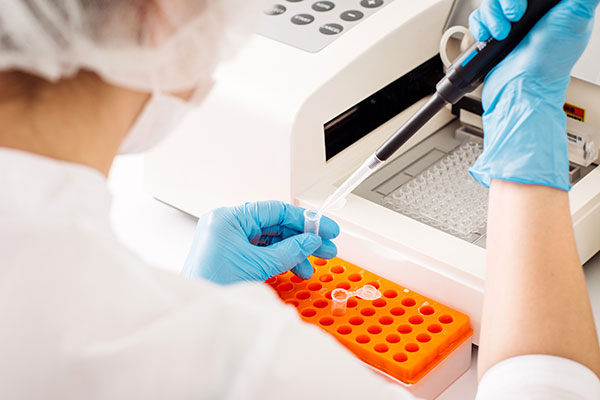