The development history of ADC drugs

The development history of ADC drugs

The development of oncology drugs can be traced back to the middle of the twentieth century. It has been discovered that nitrogen mustard destroys individual bone marrow and lymphatic tissues by targeting rapidly dividing cancer cells. Such drugs include folic acid and purine analogs (methotrexate and 6-mercaptopurine), microtubule polymerization inhibitors/promoters (vinca alkaloids and taxanes), and DNA disruptors (anthracyclines and nitrogen Mustard). Because early tumor drugs not only target cancer cells but also have killing effects on all dividing cells in the body, so patients have serious side effects, which greatly limits the efficacy and use of drugs. ADC drugs may achieve selective delivery of toxic compounds to specific cancer cells. 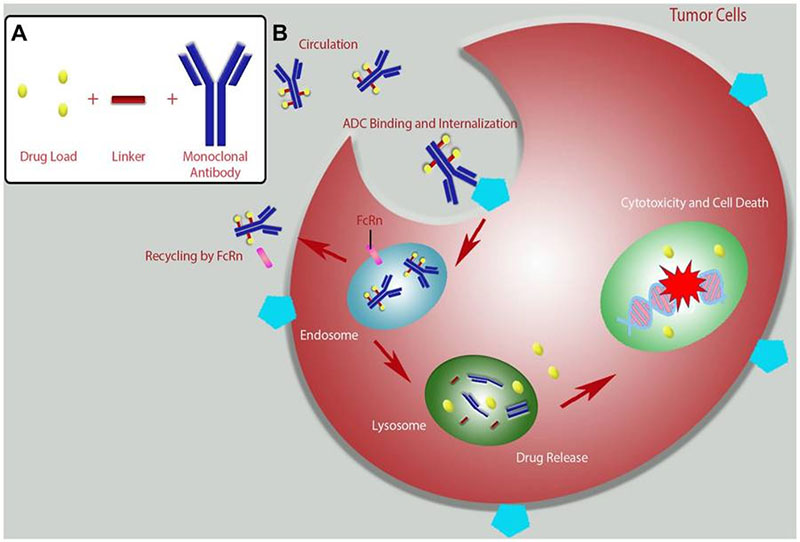 Among the first-generation ADC drugs, anticancer drugs such as mitomycin C, idarubicin, anthracyclines, N-acetyl melphalan, adriamycin, vinca alkaloids, and methotrexate are mainly conjugated to the mouse monoclonal antibody via a non-cleavable linker (amide or succinimide).

In the first generation of ADCs such as BR96 adriamycin and KS1/4-methotrexate are usually conjugated to murine antibodies through non-cleavable linkers. However, these ADCs are generally not as strong as free drugs. Then, the researchers developed gemuzumab ozogamicin (GO), which has higher efficacy because GO consists of an effective calicheamicin derivative and a humanized antibody that reduces immunogenicity. However, GO has several disadvantages, including unstable linkers, a high percentage of unconjugated antibodies, poor CMC (chemical, manufacturing, and control) performance, and high toxicity.

After nearly 10 years of the rapid development of monoclonal antibody drugs and continuous discovery of more effective anti-cancer small molecule drugs, the second-generation ADC drugs have better CMC characteristics than that of the first generation.

However, second-generation ADC drugs have a narrow therapeutic window, which is mainly due to their low off-target toxicity and competition with antibodies that do not bind small molecule drugs to tumor targets. The drug-to-antibody ratio (DAR) in the second-generation ADC drugs is 0-8. Usually, DAR over 4 will show low tolerance, high plasma clearance efficiency, and low in vivo efficacy.

The key to third-generation ADC drugs is site-specific binding, which can ensure that the antibodies has a clear DAR (2 or 4). Through the specific binding of small molecule drugs and monoclonal antibodies, the stability and pharmacokinetics of the drugs are significantly improved, and the drug activity and the binding activity to cells with lower antigen levels are increased. In addition, antibody optimization, linkers, and small molecule drugs can significantly improve the therapeutic effect of ADC drugs.

So far, a total of 8 ADC drugs have been approved by the FDA. In 2019, the FDA approved a total of 3 ADC drugs, which is the year that ADC drugs received the most approval in many years.