ADC drugs are currently mainly used in the field of tumors. Therefore, antigen targets are required to be highly expressed in tumor cells, but low or not expressed in normal tissues, or only expressed in specific tissue types. When selecting a target, it is necessary to integrate other factors, including the type of cell expressing the antigen, the cycle state of the cell (such as the division or quiescent phase), the expression level of the target, and the accessibility of the target. The target antigen should be present on the cell surface so that circulating mAb can bind to the target cell. At the same time, the antigen target should have a certain endocytosis ability to trigger the transport of the ADC-antigen complex into the cell. However, the number of surface antigens on tumor cells is usually limited, and the internalization process of antigen-antibody complexes is usually inefficient. Therefore, the selection of targets is challenging.

Among the ADC drugs currently on the market, the indications for the five targets of CD22, CD30, CD33, CD79b, and BCMA are hematoma; the indications for the three targets of HER2, Nectin-4, and Trop-2 are solid tumors. In addition to the above-mentioned products on the market, ADC drugs targeting CD19, Mesothelin, PSMA, EGFR, Nectin-4, CD56, CD138, CD74, etc. have also developed rapidly or are more popular. 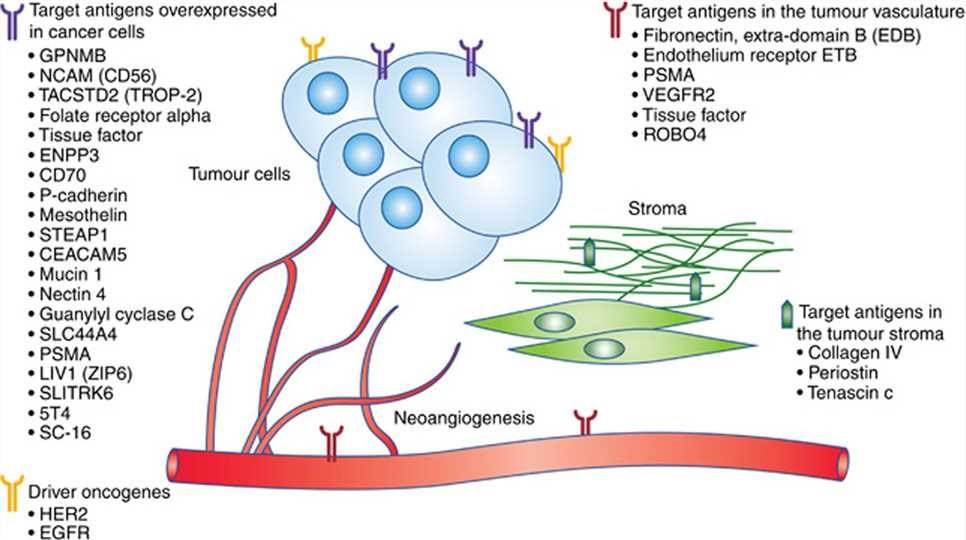 HER2 is an epidermal growth factor receptor with tyrosine kinase activity. It is also called an "orphan receptor" because of its insoluble ligand. HER2 expression is low in normal epithelial cells and overexpressed in tumor cells. Or amplification. HER2 is closely related to the formation and progression of malignant tumors. Tumors with high HER2 expression show strong metastasis and invasion capabilities, poor sensitivity to chemotherapy, and are prone to recurrence.

As an important target in breast cancer treatment, HER2 has been developed for many years. Related monoclonal antibodies, small molecules, and ADC drugs are all on the market. Currently, two ADC drugs for the treatment of HER2+ positive breast cancer have been approved worldwide: Kadcyla and Enhertu. It can be seen from the above drug research that HER2-ADC drugs have made continuous breakthroughs in the treatment of HER2 expression-related cancers, such as breast cancer, gastric cancer, bladder cancer, and colorectal cancer. It highlights the current time when HER2 target research has become mature, ADC drugs have further broadened the application range of targeted therapy, and the potential of mature targets has been further explored.

As a new type of anti-tumor therapy target, the cluster of differentiation (CD) antigens have always been a hot spot in clinical and scientific research. At present, the CD antigen has become an important target antigen for the treatment of hematological tumors, accounting for a large proportion of ADC drugs currently on the market.

From the point of view of targets, there are lots of ADC drugs targeting CD30, CD22, CD33, and CD79b, approved, most of which are concentrated in hematological tumors such as leukemia, lymphoma, and non-Holy lymphoma. Among the research targets, drugs targeting CD19, CD56, CD138, CD37 are advancing clinically. Among them, CD19 is an ideal target for the treatment of various B-cell malignancies. It has surpassed PD-1 and PDL- in the past two years, become the most popular research and development target in the field of tumor immunotherapy and is also the target of CAR-T therapy. Currently, there is no ADC drug targeting CD19 on the market, but ADCT-402 (loncastuximab tesirine) has applied for FDA listing for the treatment of relapsed/refractory diffuse large B-cell lymphoma (r/r DLBCL). Therefore, the druggability of CD19 in the ADC field has basically been verified, and it is expected that drugs with the same target will be launched in the future.

In terms of indications, the current CD series targeted ADC drugs are still concentrated in the development of hematoma, and no substantial progress has been observed in solid tumors. IMGN901 (Lorvotuzumab mertansine), which targets CD56, once demonstrated excellent results in the treatment of small-cell lung cancer but was shelved due to potential patient infection problems. Therefore, in the future, solid tumors in the CD series are a direction to be broken.

Trop2 is a cell surface protein encoded and expressed by TACSTD2 gene, also known as tumor-associated calcium ion signal transducer. Its high expression and differentiated expression characteristics are a good choice for ADC drug targets. In 2020, the first Trop2 targeted ADC drug sacituzumab govitecan-hziy (Trodelvy) was quickly approved by the FDA for use in adult patients with metastatic triple-negative breast cancer (mTNBC) who have previously received at least two therapies for metastatic disease. In addition, ADC drugs targeting Trop2 have shown promising effects in non-small cell lung cancer, urothelial cancer, and other subtypes of breast cancer. Many biomedical and technology companies in China have begun to develop antibodies targeting Trop2.

The BCMA target is a new hot target in the treatment of hematoma: BCMA, also known as TNFRSF17, is a member of the TNF-receptor family and a hot target for CAR-T therapy. GSK's Blenrep is the world's first approved ADC drug targeting BCMA. The FDA is based on data from the DREAMM clinical trial project, including the critical DREAMM-2 study. The approval of Blenrep not only marks the success of the BCMA target in the ADC field but also shows that ADC drugs have the potential to treat relapsed or refractory diseases.

C-Met is a membrane surface receptor protein with tyrosine kinase activity, participates in the regulation of cytoskeleton rearrangement, intracellular signal transduction, and many other physiological processes, and is closely related to cell proliferation and differentiation. Compared with normal tissues, c-Met has a significantly higher expression in tumor tissues. The excessive activation of the c-Met signaling pathway is closely related to the occurrence of a variety of malignant tumors, including gastric cancer, lung cancer, esophageal cancer, breast cancer, liver cancer, colon cancer, prostate cancer, pancreatic cancer, kidney cancer, head and neck cancer, ovarian cancer, glioma, etc. Therefore, c-Met has great potential as an ADC target and is expected to be applied to a variety of cancers in the future. The c-Met-ADC drug is still at a relatively early stage, and ABBV-399 developed by AbbVie is the fastest-growing drug in research, which has entered clinical phase 2.

ROR1 is a transmembrane tyrosine kinase receptor, which is significantly increased in a variety of blood cancers and solid tumors, including B-cell chronic lymphocytic leukemia (CLL), acute lymphocytic leukemia (ALL), non-Hodg Gold lymphoma (NHL), and myeloid blood cancers, solid tumors including colon cancer, lung cancer, pancreatic cancer, ovarian cancer, and other cancers. therefore, ROR1 has become a tumor-specific target of attention. On November 5, 2020, Merck spent US$2.75 billion to acquire VelosBios and obtained its main research product VLS-101, which is an ADC drug targeting ROR1. In addition, CStone Pharmaceuticals also announced a ROR1 ADC drug LCB71, in collaboration with LegoChem, which shows the potential of the ROR1 target application in ADC drugs. In the future, the ROR1 target may produce a new generation of ADC star drugs.

With the maturity of ADC design technology, the use of ADC to treat indications other than oncology has been explored, including ophthalmology, immunology, anti-infection, endocrine/metabolic, etc. Most of the ADCs under research for the treatment of non-cancer indications are still in the early stage of development, but the proportion is gradually increasing. The proportion in the early stage of development is significantly higher than that in the clinical stage. In the future, as preclinical trials will gradually move to clinical trials, non-cancer indications may become the next "blue ocean" for ADC drug development. According to incomplete statistics, most of the ADC drugs used in the treatment of non-cancer indications are non-cytotoxic drugs, accounting for 90% of research and development projects. These non-cytotoxic drug loads include immunomodulators, enzymes, antisense oligos, and siRNA, which are expected to usher in innovative therapies for non-cancer indications in the future.