After lysosomal degradation, the payload was released in bioactive form and plays a therapeutic role, leading to the death of cancer cells. The number of intracellular payloads is determined by the number of surface antigens per cell, the number of drug payload molecules per ADC (also known as drug-to-antibody ratio, DAR) and the time required for antigen to return to the cell surface. The payload may escape after cancer cell death and degradation, or it may release from the plasma membrane of cytoplasm, which may be beneficial (also known as bystander effect) or harmful. The first ADC (Mylotarg) was approved in 2000. The number of approved ADCs has more than doubled since 2019, which means that the ADC field continues to hot. 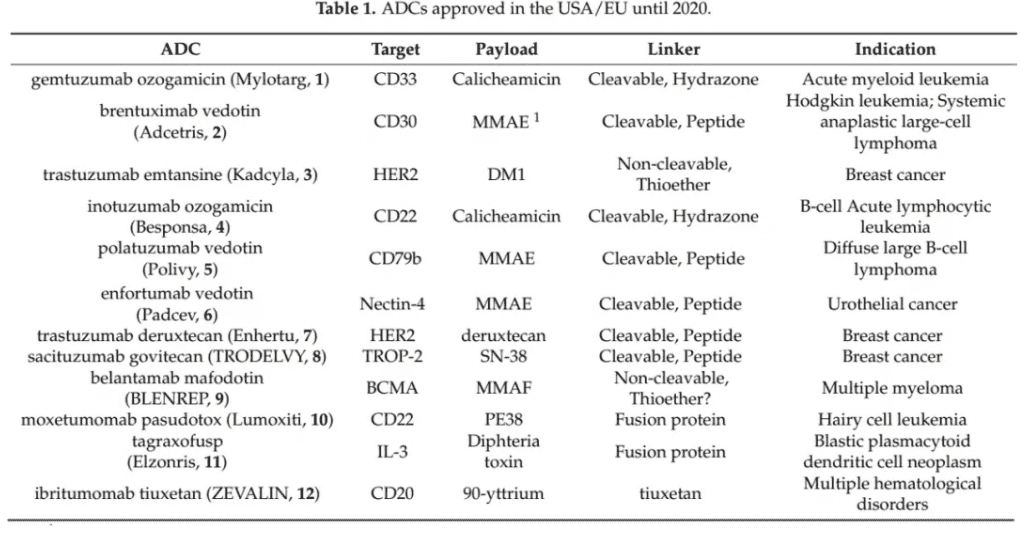 Auristatins are important payloads used in ADCs, and the most famous family member MMAE exists in two marketed drugs Adcetris and Polivy. At present, more than 10 ADCs with effective payloads of auristatin (such as MMAE) or monomethyl auristatin F (MMAF) are undergoing clinical trials. The structure-activity relationship (SAR) of Auristatins has been extensively studied, mainly focusing on the terminal subunits: P1 (N-terminal) and P5 (C-terminal). The most common method is to introduce carbamate on P1.

In 2015, the researchers of Seattle genetics expanded the scope of ADC payloads to tertiary amines, especially N-dimethyl auristatine, and combined drugs with monoclonal antibodies for the first time through ammonium bonds. The obtained ADCs were stable under physiological conditions, with high in vitro and in vivo activities and strong immune specificity. These results expand the types of drugs that ADCs can be used for targeted delivery. Recently, Agensys introduced the azide group into the P2 and P4 subunits by adjusting the central subunit P2-P3-P4. After conjugating with the protease cleavable linker, it produced hydrophilic derivatives with increased in vitro and in vivo efficacy, which provided a new way for linkers.

In general, in auristatin that contains both amine and alcohol reactions, the preferred junction is the conjugating of the amine through carbamate bond. Seattle genetics has developed a new strategy to conjugate the effective payloads containing alcohol with methylene alkoxy carbamates (MAC). To stabilize the MAC bond, both the basic group and the electron-withdrawing group are close to the amino bond. The results show that the conjugate is stable under physiological conditions with high titer and has immunospecificity both in vivo andin vitro.

Maytansine is very effective microtubule assembly inhibitor, which can induce cell mitosis arrest. But the structure of Maytansine is difficult to conjugate because it has no reactive functional groups. To overcome this problem, a series of very effective derivatives containing SMe groups have been created. The first examples of this class of molecules are DM1 and DM4 with methylthiopropionyl rather than natural N-acetyl. The payloads DM1 and DM4 are conjugate to the linker through disulfide bonds. The stable disulfide bond linker exhibits good stability in blood circulation while maintaining effective division within the cell.

In addition, several Maytansine-based ADCs use the same secondary hydroxyl as junctions and carry transglutaminase bioconjugated linkers in most cases. For example, a Daratumumab-based ADC has been proved to specifically deliver DM4 to cancer cells with overexpressing CD38. Recently, ImmunoGen has developed a new type of ADC, which contains a sulfur-containing Maytansinoid. It is linked to the antibody through a highly stable tripeptide linker with the same junction as the above-mentioned hydroxyl. Compared with the previous Maytansinoid ADC, increasing the number of methylene units in the linker increases the bystander killing activity and improves the efficacy in mice. In similar method, keeping the core macrocycle unchanged, Regeneron and Abzena studied the effect of N-methylalanine nitrogen substitution and changed the length of the side chain on the macrocycle, as well as the linker connecting primary amine and secondary amine.

Pyrrolobenzodiazepines (PBDs) are a class of natural product with anti-tumor activity. Their mode of action is selective alkylation in the small grooves of DNA, where the N2 of guanine forms a covalent bond with the electrophilic N10/C11 imine on the PBD.

Seattle genetics used SGD1882's aniline as junction to mimic the PAB unit commonly used in cleavable linkers to release free PBD payloads. StemCentrx worked with Spirogen to use the N-10 position of the PBD to link a carbamate linker. The same carbamate linker was also used by Immunogen for the structurally similar indolechlorobenzodiazepine dimer (IBD) payload. They also reported different methods for the same type of IBD, in which a substituted benzene ring was used as a linker between the C8/C8' positions of two IBD monomers. 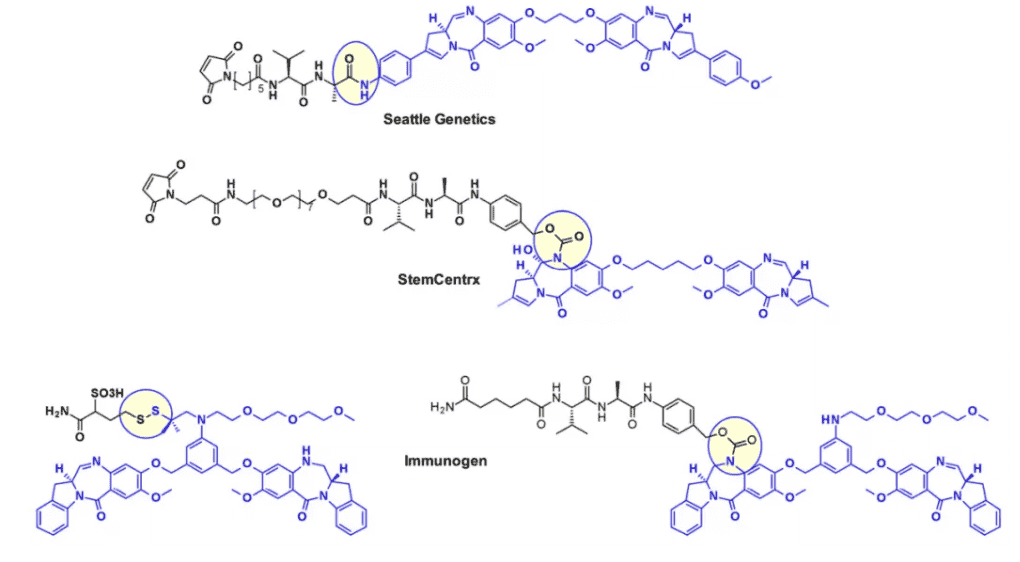 Duocarmycin is a powerful cytotoxic substance that binds to the small grooves of DNA through its highly active cyclopropane ring and alkylates adenine at the N3 position. The cytotoxic activity of acyclic and halomethyl-form Duocarmycin is significantly reduced. Since the phenol in the molecule can be used as meso activator to form electrophilic cyclopropane, the link strategy in the development of Duocarmycin ADC focuses on the linker connection of the phenol functional group. In SYD985 developed by Synthon, the phenol group is the connection position between the Mc-val-cit-PABC payload and the dicarbamate linker. Free phenol promotes intramolecular rearrangement to electrophilic cyclopropyl after cathepsin B cleavage. Medarex connected the linker through the aromatic amine in the molecular non-alkylation part and masked the phenol prodrug with N-methylpiperazine carbamate. In vivo, phenol will be released and then active cyclopropane will be formed under the action of carboxylesterase.

Camptothecin (CPT) and its derivatives are classic examples of topoisomerase I inhibitors. It stabilizes DNA single-strand breaks induced by topoisomerase. When the ternary DNA-TOP1-inhibitor complex encounters a replication fork, DNA double-strand breaks. Natural Camptothecin is a five-ring structure and the extremely low solubility prevents its wide application as a cancer treatment drug. Its water-soluble prodrug Irinotecan has obtained marketing approval for metastatic colorectal cancer. SN-38 is the active metabolite of Irixintan, which is produced in vivo by the action of human liver carboxylesterase, and it can be inactivated by opening the lactone ring. Immunomedics has established two different strategies to bind SN-38 through its hydroxyl moiety. In one example, the linker is connected through a more reactive C-10 phenol group to produce a stable carbamate bond. In another example, C-20 hydroxyl was used to stabilize the lactone, which was crucial to the in vivo efficacy.

Another very effective drug suitable for ADC is Irinotecan (DDX-8951f). This camptothecin analog has an amine substituent on its cyclohexane ring, bridging the 7 and 9 positions. The amino group of Irinotecan contributes to its water solubility and the rigidity cyclohexane is believed to be beneficial to the balance of active lactone and inactive hydrolyzed hydroxy acid. Aminohydroxyl acetylation produces DXd (1) and 4-amino butyrylation produces DXd (2), both of which retain the biological activity of Irinotecan. Pendant hydroxyl and amino groups are obvious junctions, which can be linked by an enzyme-cleavable Gly-Gly-Phe-Gly tetrapeptide linker. ADC conjugated with anti-HER2 antibody has shown great potential against HER2-expressing cancers in a clinical setting.

Although the cyclohexylamine of DXd is considered to stabilize the biologically active lactone, it carries a chiral center which complicates synthesis and SAR research. To overcome this difficulty, Immunogen researchers have development a new set of Camptothecin analogues that can be conjugated with monoclonal antibodies. Here, the extra chiral center is eliminated. Starting from a common intermediate, the researchers tried three types of structures and then used different polyaniline linkers to connect the payload. When coupled with anti-human epidermal growth factor receptor (HuEGFR) antibody, the ADC is effective for EGFR-positive HSC-2 tumor xenograft models. 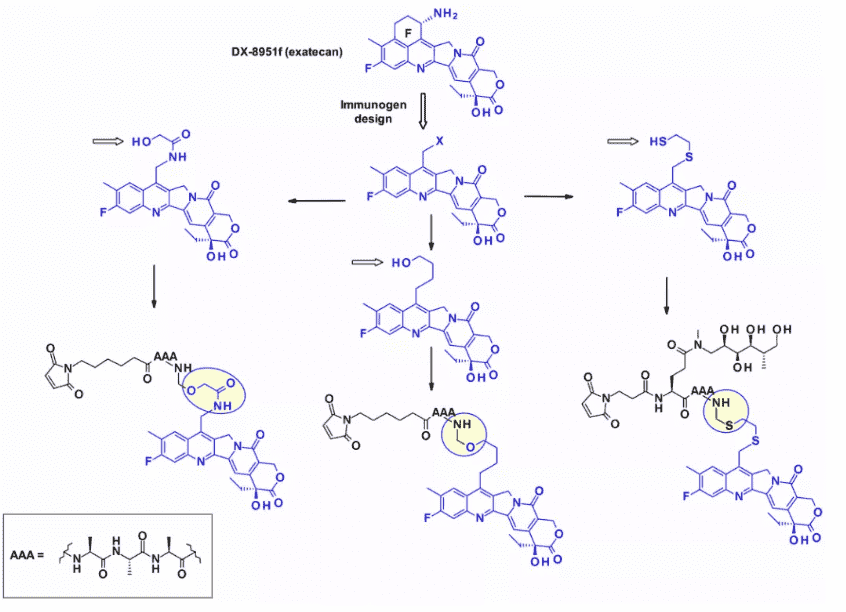 Calicheamicin is a class of enediyne antibiotics that have been widely studied. Its structure and mechanism of action are particularly interesting and complex, making it a class of antibiotics in the ADC payload field. The link strategy of Calicheamicin in ADC takes the adc Mylotarg as well as Besponsa on the market as an example. The release of the payload is carried out in two steps: the hydrazone is sensitively cleaved in the acidic intracellular environment and then the disulfide bond is reduced by the intracellular glutathione. The released thiol undergoes intramolecular 1,4-addition Bergman cyclization reaction to produce a diradical. This reactive intermediate can extract hydrogen atoms from the deoxyribose backbone, causing double-stranded DNA breaks, which in turn leads to cell death.

Recently, a new natural product called Uncialamycin was isolated from Streptomyces found in lichens in British Columbia. This structure was confirmed by total synthesis, and since then, some highly efficient synthetic analogues have been prepared as potential payloads for ADCs. The BMS researchers showed that the secondary amine of Uncialamycin is not a suitable junction due to its low reactivity under various peptide coupling conditions. The researchers synthesized an analogue in which an amino group was directly introduced into the aromatic ring, but the reactivity of this aniline was also too weak to be a group introduced as a linker. On the other hand, the use of aminoethyl extensions to install aliphatic amines provides a suitable junction for the linker. For the latter payload, they used protease-cleavable dipeptides and non-cleavable linkers to prepare precursors. CD70-ADC has a cleavable linker and has a highly specific cytotoxic activity to kidney cancer cell lines, while the corresponding non-cleavable ADC has no activity on the same cell line. Recently, BMS researchers used phenolic groups as junctions in the designed, highly effective, and chemically stable analogs of Uncialamycin. Using the newly developed phenol alkylation, a classic cleavable linker is added to the phenol group of the payload. Conjugating the generated payload with an antibody which shows antigen-specific anti-tumor activity both in vitro and in vivo.

Targeted spliceosome is a large ribonucleoprotein complex involved in mRNA processing, providing a promising therapeutic option for targeted cancer therapy. There are several natural products that can inhibit RNA splicing by binding to different spliceosome subunits. The most representative one is Thailanstatin A, which can bind to the SF3b subunit of the spliceosome to prevent RNA splicing. Thailanstatin A lacks a group suitable for linking a linker. To solve this problem, carboxylic acids are coupled with ethylenediamine to introduce amine-containing spacers, which are usually used for the installation of linkers. Another difficulty in using this natural product for ADC is the existence of multiple reactive functions. For example, the diene in the central core can react with the maleimide moiety for biological conjugation through the Diels–Alder reaction. This problem is solved by using another conjugated moiety halogenated acetamide. ADCs that combine these two modifications and contain a cleavable linker are reported for the first time in patent literature, and they are claimed to have moderate activity in several cell lines expressing HER2.

Recently, Pfizer reported that the direct binding of carboxylic acid to the effective surface lysine of the antibody (without linker coupling) resulted in the most effective Thailanstatin ADC to date. The activity of these lysine conjugates is related to the drug load, which is not usually observed in other payload classes. ADCs have shown good effects in gastric cancer xenograft models.