Exatecan mesylate: a novel topoisomerase I inhibitor in ADC technolog

Exatecan mesylate: a novel topoisomerase I inhibitor in ADC technolog

Antibody-drug conjugates (ADCs) are promising drugs. Compared with conventional chemotherapy drugs, they have a wider therapeutic index (TI) because they can effectively and specifically deliver drugs to tumor cells expressing antigens.

Exatecan mesylate (DX-8951f), a semisynthetic water-soluble derivative of camptothecin, is a new type of topoisomerase I inhibitor with anti-tumor activity and is suitable for a variety of xenograft models (including in vivo CPT-11-drug-resistant tumor) with a stronger potency.

The scientists developed a novel payload linker technology by using the anti-HER2 antibody trastuzumab and exatecan derivatives (DX-8951 derivatives, DXds). Trastuzumab and DXds are joined together through maleimidohexanoylhexosyl glycidyl bonds. After the reduction of the interchain disulfide bond of the antibody, β-glycyl-phenylpropanine is formed through a cysteine residue Aminoacyl-glycine (GGFG) peptide linker. The peptide linker is designed to be cleaved by lysosomal enzymes and subsequently release DXd. Testing showed that after intravenous injection of ADC into HER2-positive KPL-4 tumor-bearing mice, DXd was mainly released in the tumor as designed. The anti-HER2-DXd ADC showed anti-tumor activity in vitro and in vivo, indicating the importance of this new technology. 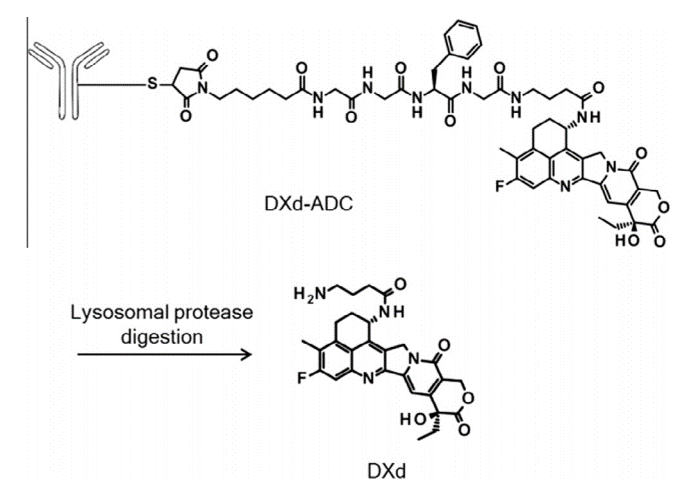 In this study, scientists applied the topoisomerase I inhibitor DXd to a variety of antibodies (including those that have been validated by ADC, such as anti-CD30, CD33, and CD70 antibodies), all of which demonstrated the versatility of the new payload. The results showed that the DXd payload has about 10 times stronger topoisomerase inhibitory activity than SN-38. In addition, DXd ADC has a stable linker part, designed to be cleaved by lysosomal enzymes, which should have a specific payload release capacity in the cell. These improvements may result in a larger TI in the DXd ADC than that in the SN-38 ADC.

In summary, these findings indicate that this new technology with low bone marrow toxicity potential can be widely used in the ADC field and provide additional payload linker options for traditional technologies.