In order to avoid unstable linkers, the first commercialized ADC drug, Mylotarg, chose a relatively inert hydrazone linker. However, Mylotarg continues to hydrolyze in the plasma and loses its payload as a result. HuC242-SPP-DM1 adapted disulfide bonds also lost much payload in the blood circulation. In order to avoid the linker instability, researchers developed the most widely used linker-maleimide (Fig 1).

Fig 1. Conjugation of Cysteines with Maleimides.

Maleimide linker produces relatively stable sulfur bonds by covalently binding cysteine thiols on the antibody to the Michael receptor. However, the sulfide bond is only moderately stable and the linker exchange reaction will occur when encounters other thiols-containing amino acid residues with comparable nucleophilicity, resulting in the loss of ADC payload (Fig 2). The inverse Michael addition of maleimide linker occurred first, followed by the addition of exogenous thiols (cysteine and GSH on serum albumin) to maleimide resulted in approximately 75% payload transfer loss. Therefore, developing a relatively stable linker is necessary to maintain ADC stability.

Fig 2. The mechanism for the improved stability of ring-opened succinimides.

Hydrolysis occurs slowly during maleimide linker transferation of payloads. Thus, it is difficult for hydrolysis products to undergo inverse Michael addition, which may be due to the weakening of proton activation at the carbonyl α-site after imide hydrolysis. Suppose the total antibody clearance rate of ADC in the blood is slow and the stability of the linker and antibody adapter is improved, the biological activity of ADC will enhance. According to the above speculation, hydrolyzed maleimide may be ideal because it retains the advantages of mature maleimide while avoiding its disadvantages.

After the hydrolysis of maleimide, “ring-opening” ADC has increased stability and decreased reactivity, which is possible for antibody coupling directly. Experimentally, it was found that the hydrolysis rate of the MC structure was prolonged. However, the hydrolysis rate increased significantly when 6 PEG units were embedded in the MC substrate (Fig 3). The reaction mechanism may propose that the oxygen on the first PEG coordinate with water molecules and guiding water molecules to attack carbonyl from the optimal angle, thus accelerating hydrolysis reaction (Fig 4). In the experiment, trastuzumab targeting Her2 was selected to open disulfide bonds using TCEP, and coupled with LP (linker + payload) to obtain structures 1-6. Subsequently, it was hydrolyzed in different buffer systems, and MS monitored the light chain modification process with a small molecular weight. The results showed that the molecular weight of the light chain and LP was 24540. With the advance of hydrolysis time, the molecular weight of hydrolysis was 24560. Under pH = 9.2, the ADC was transformed successfully after 14 h of reaction. Nevertheless, ADC without PEG unit maintains 54% conversion at PH = 9.2 for 14 h.

In summary, the affinity of hydrolyzed and unhydrolyzed ADCs to Her2 antigen was roughly the same as unmodified trastuzumab and similar in vitro efficacy. However, hydrolyzed ADC had higher in vitro stability, better selectivity, better PK exposure, and better effectiveness.

In order to avoid reverse Michael reaction, more inert Michael receptors can be selected as the linker. The structural activity of alkynes and amides is weak, which seems to be a suitable choice. 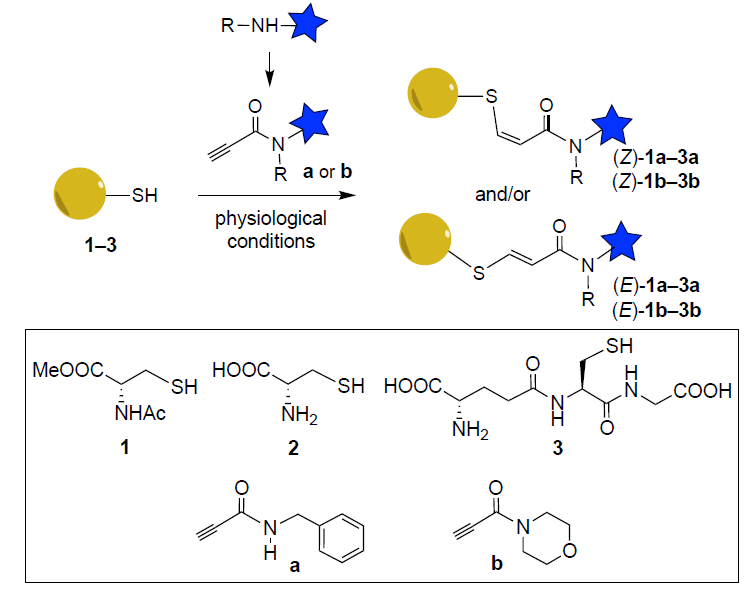 When modified cysteine 1, cysteine 2 and glutathione 3 were used as substrates and linker for the conjugation reaction, it was complete within 30~70 min at pH=7.4 (Fig 5). Since the addition of alkynes and thiols retain trans confirmations ( Z-configuration dominates), the resultant thiols and linker adducts exhibit high stability than maleimide linkers in the presence of acid-base and excess thiols. This linker has not been applied to real ADC drugs for in vitro and in vivo evaluation.