As a leading service supplier in antibody-drug conjugate research and development, BOC Sciences is a pioneer of ADCs cytotoxin discovery and manufacture, providing the most comprehensive list of cytotoxic products globally. We have GMP and ISO-certified contract manufacturing facilities to support customers' diverse project research needs.

Cholinoreceptor (ChR) is a receptor for acetylcholine in a postsynaptic membrane, which can be divided into muscarinic receptors (M receptors) and nicotinic receptors (N receptors) according to the sensitivity of the receptors that transmit signals to muscarinic or nicotine. M receptors are mainly distributed in effectors innervated by cholinergic postganglionic fibers, such as heart and smooth muscle. It has been demonstrated that these receptors participate in the autoregulation of synaptic transmission in the neuromuscular junction of vertebrates. According to the distribution, N receptors are divided into N1 and N2 two types. Both are ligand-gated cation channels. N1 is located in the postsynaptic membrane of the ganglion and can cause excitation of postganglionic neurons in the autonomic ganglia. N2 receptors are located in the skeletal muscle endplate membrane and can cause motor endplate potentials, leading to skeletal muscle excitation. 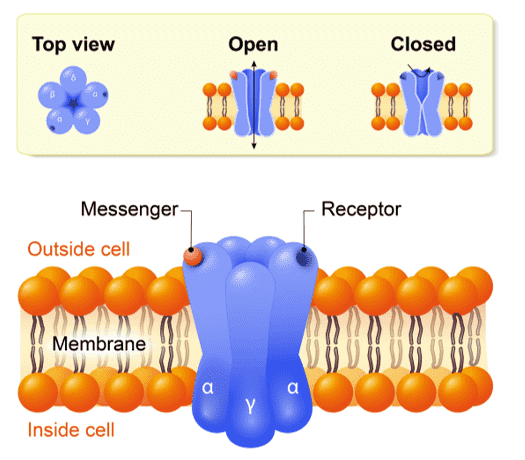 Neuronal nicotinic receptors (NNRs) are a family of ligand gated ion channels widely distributed in both the peripheral (PNS) and central (CNS) nervous systems and naturally activated by the neurotransmitter acetylcholine (ACh). These receptors play an important role in different physiological and neuropathological states, including Parkinson’s and Alzheimer’s diseases, pain, anxiety, and tobacco dependency. NNRs are composed of five homologous subunits symmetrically arranged around the ion pore, and there are several types of receptors depending on its subunit composition; each type has its own pharmacological and functional characteristics. NNRs are the targets of many substances that are being explored for the treatment of the diseases mentioned above.

Compounds that act on nicotinic acetylcholine receptors (nAChRs) in the CNS and periphery have been reported to show antinociceptive activity in several rodent acute and chronic pain models. nAChRs are ligand-gated ion channels composed of a and b subunits that assemble to form receptors subtypes with a wide range of physiological and pharmacological profiles. nAChRs are preferentially located at the preterminal and presynaptic sites regulating neurotransmitter release in several brain regions. As an ADC cytotoxin, Diplacine is a nicotinic cholinoreceptor antagonist at the neuromuscular junction.