As a leading chemical supplier, BOC Sciences provides cytotoxin and other ADC products to support your production. We are committed to providing competitive prices and timely delivery of our products with guaranteed quality and recognized quality. Furthermore, we offer our customers with comprehensive one-stop-shop of all aspects in ADC development and evaluation. 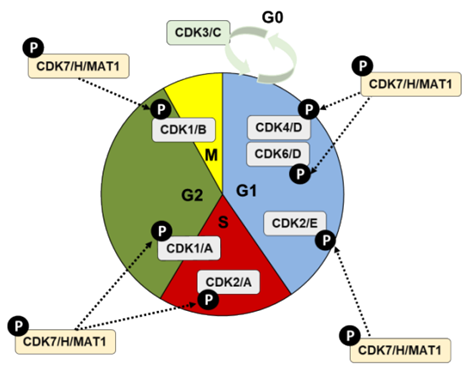 As a versatile biological macromolecule, cyclin-dependent kinase (CDK) is widely studied since its efficacy in cell cycle progression, transcription control, and neuronal development.  Deregulation of the cell cycle, a hallmark of human cancer, is frequently associated with aberrant CDK activity through mechanisms that may include mutation/overexpression of CDKs, or mutations to genes encoding proteins that directly or indirectly modulate CDK activity. Pharmacological inhibition of CDK family members is a potential therapeutic approach for the treatment of cancer. The agents targeting CDKs are now being investigated to treat tumor cell, including lung, prostate and ovarian cancers.

The mammalian cell cycle is tightly regulated during cell division to inherit precise genetic material. Cellular division depends on the progression of four distinct phases in the cell cycle, G0/G1, S, G2, and M. Cell cycle checkpoint plays a crucial role in the decision regarding cell fate. Cell cycle arrest is promoted by cyclin-dependent kinases (CDKs). Although several kinases are involved in cell proliferation, CDKs mainly orchestrate the cell cycle in a complex with their cyclin partners and subunits, which are required for CDK activity. Twenty-one CDKs have been identified so far. CDK1, CDK2, CDK4, and CDK6 have key roles in the regulation of cell cycle checkpoints, and CDK8, CDK9, and CDK19 are involved in transcriptional regulation. The molecular mechanisms of other CDKs remains unknown, although it is possible to predict that they could contribute to cell cycle processes in response to diverse cytotoxic stress. In cancer cells, cell cycle CDKs, cyclins and CKIs are frequently dysregulated, and the CDK/cyclin complexes are often overexpressed. The cyclin D-CDK4/6-p16-retinoblastoma (Rb) pathway is commonly altered in most human cancers, leading to abnormal cell proliferation.

Cyclin-dependent protein kinases (CDKs) are attractive targets for drug discovery and efforts have led to the identification of novel CDK selective inhibitors in the development of treatments for cancers, neurological disorders, and infectious diseases. CDKs are valid targets as they function as essential regulators of cell growth and differentiation. During the last decade, great progress has been made in discovering and developing CDK inhibitors. Initial examples of CDK-targeted protein degradation with small-molecule PROTACS or antibody drug conjugates (ADC) have been recently reported. As a 16-membered macrolide antibiotic, Hygrolidin has antitumor activity to induces p21 expression and abrogates cell cycle progression in G1 and S phases by acting on CDKs.